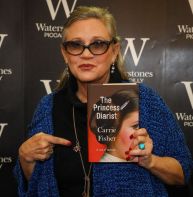 The first time I met Carrie Fisher was at the Dallas Comic Con several years ago. What I loved about meeting Carrie is how incredibly warm and genuine she was, to everyone. This was back when the Dallas Comic Con was still on the smaller side, and you could easily walk up to a celebrity without the fear of a crazy line to meet them or roped off areas for days. You could also take more than a few moments to speak with them.

Going to conventions as much as I have, I’ve seen my share of celebrities and the different evolutions of contact that they make with fans. Some are standoffish, some are polite and then, every once in a while, you meet those few celebrities who really want to be there, and most importantly, really want to meet their fans. Carrie was the exception.

Every person she met was greeted warmly, Carrie didn’t know strangers, she knew friends and she had a million of them. I remember actually being nervous to meet her and going over in my mind what I was going to say so that I wouldn’t sound like a total fangirl. This was not common for me, but Carrie meant a lot to me.

The first time I saw Star Wars, my Uncle showed it to me. I knew it was an important movie to him and there was that little part of me that wanted it to be important to me too, but nothing could have prepared me. I had seen so many movies up to this point, but Star Wars was decidedly different and it was because of Carrie. When she came on the screen she was strong and powerful. It was the first time I had seen a female lead that I felt I could connect with and embody. After languishing on the stories and films of women, barely heroines, being saved by a strong man, Princess Leia was in a breath, refreshing. Princess Leia is who I looked up too. She lost so much, but she came through with strength, courage, and diplomacy. Needless to say, my little mind was imprinted, and I knew at that moment the type of person; woman I wanted to be.

As I got older Carrie just got funnier, and her humor and utterly unapologetic approach to life’s ups and downs helped me personally through some tough moments I encountered in my youth. It’s funny how fellow creatives can do that, help you see the light even in yourself.

Fast forward back to the day I first met Carrie. She was doodling on her table, drawing little houses, clouds, random pictures on butcher paper that was placed over her entire table. She was looking down and drawing when I introduced myself. She was warm and kind and through some crazy nervous energy, I told her she meant a lot to me (of course while trying not to sound totally crazy). She was genuine and completely quirky and she made me feel as if I wasn’t completely insane (which in my mind I couldn’t help but think I was). It was her birthday at the time so I wished her a Happy Birthday, her eyes lit up, she grabbed my hands and thanked me not just for wishing her happy birthday, but for being there, telling her how I felt and what she meant.  I was giddy and you could have knocked me over with a leaf. To that point in the line, I was the only person to wish her Happy Birthday, she expressed that it meant a lot to her that I took the time to tell her that, that I took the time to be there, and she wanted to know more about me. My mind exploded just a bit at this moment, whoa.

I remember she even commented on the picture I brought to her to sign. It wasn’t the typical super sexy slave Leia promo shot that everyone had. It was a beautiful and serene promo shot of her in the sunlight on the forests of Endor.  Even Carrie expressed how she gets tired of seeing her own boobs sometimes. We spoke for a few minutes more and it was wonderful. What struck me is that I had a real candid conversation with her, and I never felt uneasy. I literally walked away thinking and feeling as if I had just spoken to a good friend that I hadn’t seen in a while. Madness.

Later on, I ran into her again taking the time to shop around the different vendors and artists that were at the con. I rarely see celebrities do this, but Carrie wasn’t really a celebrity in that sense. She got to know people, she took the time to understand each person and why they were there. She also loved buying gifts for others and this was wonderful to witness in person, as you could bottle how happy it made her.

Yes, she was an icon and a legend but she really was more than that. She embraced her fans as a family (the fun and crazy kind) and she knew who she was. An icon, yes, but an even bigger humanitarian. She said it like it is, and never apologized for it. She was honest and frank and funny as hell.

I am so thankful that I was able to meet her and see her throughout the years. She really was our Princess. Love Love to her family and all her fans. With a heavy heart, I have to say, our Princess is now in a galaxy far far away.

CARRIE WE WILL MISS YOU DEARLY 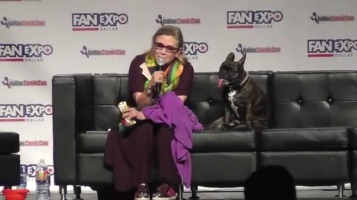 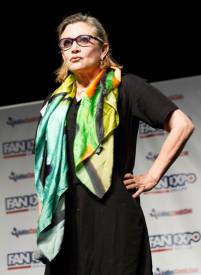